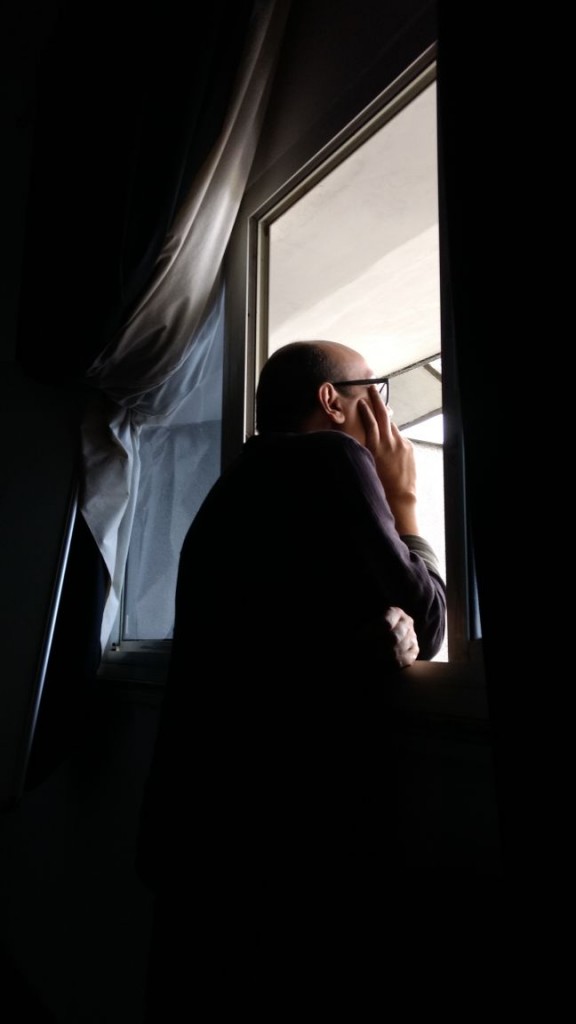 The first time Noton, as I called Aveek, appeared in my dreams after his death, he was sitting at the foot of my bed in a loose-fitting white kurta while me, my mother, and other family sat and planned a memorial for him. He looked pleasurably bored, lost in his head as he often did when a conversation left him. The only thing he said during the dream was a gently teasing ‘baap re’, as if amused at all the planning going on for him. He wore a vintage camera inlaid with wood around his neck.

The second time I dreamed of Noton after his death, we lounged on a bed gossiping about family secrets as we did. I asked if he was reviewing the nameless book in his bag. ‘I don’t do book reviews anymore,’ he said. As we talked, he transformed into a woman my age, still Aveek.

The third time, we were having a banquet to honour him under the winter noon sky, at the playground of my former school building, where he’d once taught English. He had the same camera I saw him with in the first dream. I knew he was dead, and I was glad to see him. I wondered if we could just keep seeing him even though he’d died. He was wearing the sweater I’m wearing as I write this. He just smiled and took pictures.

I relate these dreams to you, because Noton was one of the few people I’ve met who recognised dreams for the art they are–an unconscious art, given to every human being, and what a marvel for a person like him, so given to seeing art and poetry in everything. This is why he wrote to me of his own dreams, sharing them like stories, something I find myself doing with others as well, with attention to the telling, with pride, like he did. Once, Noton wrote to me of a dream he had soon after my grandfather, his father, Dadumoni to me, died. He wrote: ‘Our parents are young again, before their later illnesses have touched them. They look the way they look in our childhood albums. My sister and I are also much younger, just beyond boyhood and girlhood, but uncomplicatedly young. We live in a peaceful old South Calcutta home. But we are getting our parents married again, and it is a happy occasion. We are improvising a ritual, involving some songs, and they both look shy and happy. My sister and I are full of a purposiveness. Then they are newly wedded. I stand on an upstairs verandah looking down on the street, and there is complex electric wiring between my level and the street. My sister is trying to tightrope-walk on this wire-path, not anxiously but as if trying out a new adventure sport. My mother is trying to persuade her to come down, holding a vessel full of cut papaya pieces, laughing yet alarmed at her daredevilry. The setting and atmosphere are light and prelapsarian, like those Bengali romantic comedies of the Sixties… i wake up happy and rested, feeling the way i feel after a good session of yoga.’

I remain moved by this, the transformation of his mind’s unconscious art, into conscious art that he shared with loved ones, his unspoken recognition of his own grief at the loss of his parents, sublimated to quiet beauty in the confines of his own sleep-rounded world. It’s no surprise that so much of the art he loved delved into the surrealism of dream, from David Lynch’s work to Tarkovsky’s. It’s no surprise that he, on reading my earliest fiction when I was a teenager, urged me to read Borges. It’s no surprise that he was the first person to give me a copy of Woolf’s Orlando to read. When I share his writing with others, several of my friends tell me they can see his writing in mine. In 2012, when I was living in Vancouver and told him that I’d watched Tarkovsky’s Nostalghia in a big-screen retrospective, he wrote back to me, Tarkovsky is an Inner Master, like a sort of head and eye guru for me, but not in an oppressive or worshipful way at all. And that, I’ve come to realise, is not so different from how I see Noton, as one of my foremost inspirations as an artist and person. In the same email, he also wrote of a cat he and Dadumoni, then still alive, had recently lost to death: i am surprised by my own grief and learning from it every day. i say as cole porter did of love, What IS this thing called loss?

So should we learn from our grief, not deny it. Noton was someone you could count on to help you grieve over loss, whether over heartbreak or the state of the world and our country or the death of loved ones or things far more mundane. He made you feel better because, while he was funny and puckish and sometimes even naive in practical matters, he was pragmatic and calm when it came to loss–he would tell you it was okay to feel wretched, to understand that feeling and move with it. Indeed, to find beauty in it, if possible. When he felt miserable about the world, I told him the same. And here we are, living with his loss, knowing it will never go away, knowing also that this means that he will never leave us entirely.

So when I dream of Noton sitting and watching us plan his memorial with the same wry amusement with which he would imagine his own death during our conversations, when I dream of him carrying the totem of a camera and a nameless book when he so loved photography and reading, when I dream of him transforming into a woman my age or wearing my sweater, I think of something else he wrote, and sent to his loved ones, after his mother, my grandmother, Ammi to me, died:

in the city far away from home where I was staying then, something strange happened every time I wore her shawl and put on that perfume. I began to realize how another person’s essence – bodily essence, and, through that, an entire way of being – could inform, and transform, subtly yet profoundly, one’s own personhood. How a length of material drapes around your body and makes you hold yourself and move, and the character and intensity of a smell that you let your body wear, become part of a whole movement of the self in the world that is your own and, just as mysteriously, not your own.

Over our frequent lunches at Fire and Ice, Noton would often tell me about how he felt compelled to wear his mother’s clothes after her death. He would talk of death, the inevitability of it, something that both frightened and fascinated him. He would talk about how he sometimes saw himself as a woman as well as a man, how he was becoming more comfortable with the arbitrariness and fluidity of gender as he aged, knowing that I too, held something of the feminine in me that I cherished as he did. He saw me like no one else, and he saw, more than most, that everyone sees the people they love like no one else can. That to be perceived, truly seen, and not just acknowledged through obligation or politeness or business, is a becoming of its own. I dream of him with a vintage camera because I know he would want to take photos of the world he now finds himself in, in our memories and imaginings. I dream of him wearing the sweater I’ve worn all through the winter of his death, because I know he would want me to know that I am him, that he is me, that he is all of us, now that he is not himself any longer. That he has, in his own words, transformed, subtly yet profoundly, our personhoods by his way of being, by living his life like a work of art to be experienced by those he loved, or even liked. I dream of him because he has become. It falls to us now to perceive him, to let him live in the way he would have wanted, to dream him anew into the person he was, is, and always will be, unforgettable.