Search
Indrapramit Das > News > All my writing from 2015 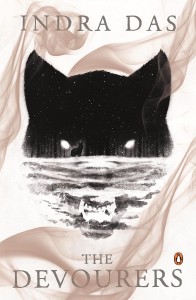 In 2015, I didn’t write as much fiction as I thought I would, because of various annoying to heartbreaking things related to living the life of a human being. I hope to use life as less of a reason not to write in 2016.

But, also in 2015, I published my first novel (not counting The Shattering Sigil, the epic fantasy novel written by Teen Me, who had it published by an Australian vanity press thinking it was a normal publisher for young beginning writers, bless his clueless soul), The Devourers. It’s about tribal shape-shifting nomads migrating from Europe to Mughal Empire during the seventeenth century, and the legacy these dual-selved travellers leave resounding into present-day India when they mingle with humans.

It’s available from Penguin Books India in South Asia. You can get it in real-world meatspace bookstores, and on Amazon India and Flipkart, among other places, if you’re in the Indian subcontinent. It was shortlisted for the 2016 Crawford Award, the Shakti Bhatt First Book Prize, and the Tata Live! Literature First Book Award. It’ll be available in the United States and Canada on 12th July 2016 from Del Rey (more on that in the next post). Next year would be the best time to consider it for Hugo/Nebula Awards nominations, if you find yourself liking it enough, since that’ll give the book some more time gain more readers.

On to the other stuff.

Stories (these are eligible for Hugo/Nebula Awards Short Story nominations this year, if you’re so inclined; if you do consider them, you have my gratitude. If you’d rather not, I wouldn’t worry, there’s plenty lovely and brilliant writers out there to nominate):